What I Was Thinking On My Wedding Day 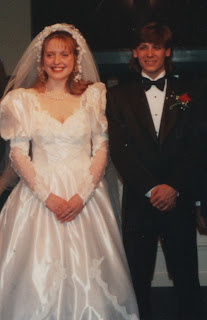 No, we were not 12. Yes we did both have a “1” at the beginning of our age. There are very few good photos from our wedding day. We were first year college students, working full time and paying (mostly) for our wedding by ourselves. So, when photographers quoted me thousands of dollars to photograph the big day, we nearly fainted politely declined. In fact, I think even with the contributions from our parents and the cost of the honeymoon, the entire budget was well under $1500. There were several friends and family members who were excellent photographers and I thought we’d made the necessary arrangements. In the end, no one brought their professional cameras and even fewer people gave me copies of the pictures they did take. (If you are reading this and have ANY pictures from our big day, I will happily pay the expense of getting copies or the negatives from you)

After the ceremony, we took pictures of the ‘bride’s party’ and the ‘groom’s party’ separately. When we took pictures together, both of us kept standing with our hands in front like we had for the other photos until someone finally said: You just got married, act like you love each other!

Here are a few things that always come to mind when I remember my first official day as Mrs. Skipperclan.

1. I have no regrets about the marriage, but for the wedding the ONE thing I would go back in time to change would be to hire a photographer. If you have to wear a potato sack instead of a bridal gown and feed your guests the rice instead of having cake, do it. Well, maybe you won’t want the pictures if you’re wearing a sack…

2. I remember thinking I wasn’t nervous about getting married like all those movies and books made me think I would be. I found out later my husband was. In fact, when a person normally says “I do” in the vows to answer the preacher, my husband said, “Yes sir.”

3. I prayed the entire day, in a very 1 Thess 5:17 fashion, that God would make our marriage successful. It actually amazes me that I was able to think at such a young age what a successful marriage would mean. Staying together until death do we part, happily; overcoming obstacles together we couldn’t imagine on that day’ and becoming something together with each other and God that we could never be on our own.

4. No matter how much you plan, something will not go according to that plan. (Hmm, lesson for this week, but I digress..) I didn’t know at the time the photos had turned out so poorly because this was back in the old days, of film. However, when we were setting up for the reception at the church that morning I was told they did not allow ANY dancing. Yep, no first dance for the bride and groom. Wow. I think that was actually the beginning of my aversion to the legalism I daily try to leave behind me.

5. I couldn’t believe this adorable, funny, loving guy…my best friend…had decided he wanted to spend the rest of his life with me. I still can’t sometimes. And he is still my best friend. 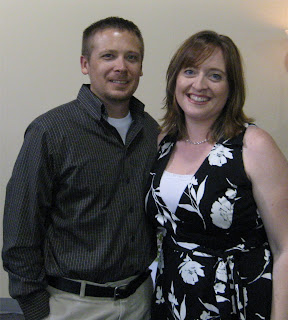