Last week I wrapped up a series on media and its impact on our lives. Appropriately, this weekend I finished another book. 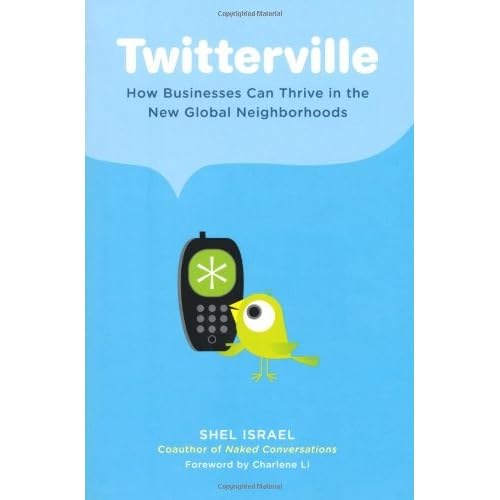 Twitterville is an interesting 292 pages that covers the birth of Twitter, how others are using it and how we can use it as individuals and businesses. Have you noticed some companies use their name such as @SouthwestAir and you have no idea who is actually sending out tweets? Other companies like @Rubbermaid note in the profile, “tweeted by Erin and Jim.” Does it matter to us who is tweeting for the companies with whom we do business? Can smaller businesses use Twitter to build brand recognition by using @thecompanyname, or should owners take a personal approach and use their @firstandlast?

Shel Israel also explores the use of the Twitter community in natural disasters and political upheavals. Again and again he shows us how it really is a small world after all. Prisoners released, funds raised for charity and citizens turned journalists by the use of a smartphone camera and applications like TwitPic. Last week’s east coast earthquake is the perfect example of how quickly and accurately information spreads through the media format. I happen to have Tweetdeck open on my computer when there was a sudden influx of tweets from friends in Pennsylvania, West Virginia, New Jersey and Virginia. They simultaneously updated their statuses to ask if “anyone else had felt the earth move?” Not only did I know in that moment there had been an earthquake, but that its reach was significant. Israel helps us realize how moments like these are part of the small town feel Twitter gives us in 140 character bursts.

If you are considering the journey into Twitterville or have recently arrived, the resources that close the book will give you a great foundation. Common terms used in Twitter and a list of the individuals acknowledged by the author are included at the end.

If there is a downside to the book, it is something that may carryover from Twitter itself. The book feels choppy and quickly changes from one point to the next. I think there is room for the text to be portioned more clearly into further chapters. This is the very point of the book though: our communication is permanently changed as a result of Twitter. The conversation occurring in the platform itself shows us how our lives are woven into the global community. While visual media uses soundbites and audience members obtain shorter and shorter attention spans, Twitter’s 140 character limit forces us to be short and (sometimes) sweet.

Have you used Twitter before? Why or why not?

← Speaking of What to Wear
Life Planner →